it is a pleasure for me to introduce to you this year´s scientific award winner Prof. Dr. Wolfgang Domschke. He was born in 1944 in Schleiz, Thuringia in the former German Democratic Republic. The picture (Fig. 1) of our award winner was taken in 1947, a year also memorable because George B. Dantzig discovered the simplex method of linear programming – a discovery which should influence Wolfgang Domschke´s future working life tremendously.

In 1957 Wolfgang Domschke and his family fled to the West via Berlin to Bavaria and I do hope that they disposed of a better vehicle than the one used by Wolfgang Domschke in this picture (Fig. 1). One can imagine that this flight impressed Wolfgang Domschke a lot, and thus laid the basis for his later interests in shortest paths, transportation, location theory and railways.

In 1965 he started studying industrial engineering in Karlsruhe. Having passed the diploma in 1969 he now speeded up. He became a research assistant at the institute of »Economic theory and OR« led by Prof. Dr. Wolfgang Eichhorn and only after 2 years handed in his PhD thesis titled »Kürzeste Wege in Graphen: Algorithmen, Verfahrensvergleiche«.

Here, shortest paths were calculated for graphs with up to 100 nodes. He already provided complexity measures for each algorithm for computational efforts and computer memory – despite the fact that the term complexity theory was unknown in Germany at that time.

Only three years later his »second book« – the Habilitation – was finished titled »Graphentheoretische Verfahren und ihre Anwendungen zur Lösung von Zuordnungs- und Standortproblemen«. Out of this second book a state-of-the-art article was extracted and published in the Zeitschrift für Operations Research (ZOR) in 1975. It became the reference in location theory for about a decade with numerous citations. 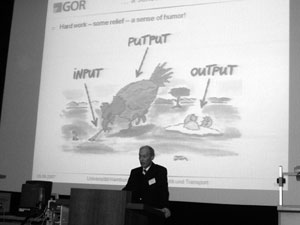 Already at the age of thirty-one Wolfgang Domschke became a university professor at the University of the German armed forces in Hamburg for Business Administration and Operations Research. Despite much administrative work he soon laid the basis for his exceptional reputation in logistics: He started writing the trilogy on logistics which later served as course material for a great number of seminars and Ph.D. courses as well as a reference handbook for numerous researchers – not only those guided by Wolfgang Domschke. These three books were published one by one in the years 1981 to 1984 – a pioneering work in this area! This trilogy has been and still is state-of-the-art. Numerous standard problems and solution algorithms are documented, didactically clear and precise. Wolfgang Domschke hates printing errors!

Students at that time said that studying logistics with Prof. Domschke requires another language – mathematics! However, one can find the »dictionary« at the beginning of each volume of his books and thus for those students who really cared there was no hurdle and new insights and perspectives opened up. Many of his scholars were motivated and started a career with this attitude in mind. Figure 2 shows professor Domschke in one of his »language courses«. As a result Wolfgang Domschke has an unprecedented number of scholars now holding a chair: There are five university professors and four professors at universities of applied sciences. Now these even have produced »new professors« (see Fig. 3). Simple arithmetic shows that if all our professors in the GOR who have passed the age of sixty – these are 121 – would have been as productive as our prize winner the number of professors in the GOR would not be 404 but exceed 1700 – i.e. would have more than quadrupled.

You might argue that this is a purely hypothetical calculation due to capacity restrictions at universities. This might be true in general – but not for Wolfgang Domschke – who participated in a number of founding committees at new universities and succeeded in establishing a strong quantitative orientation of new chairs, like in Bremen and Dresden.

In the Handelsblatt ranking you will find six of the names of his academic family tree among the top twenty-five professors of business administration in Germany – but not Wolfgang Domschke. What is the reason? One reason is that he focused on publishing and updating state-of-the-art books and these did not count for the ranking. Also citations of books were not included. If this were the case, Wolfgang Domschke certainly would rank at the top. Which are these famous books? Here are the highlights with the year of the first edition in brackets:

Nearly all books have been updated steadily until today and found an enthusiastic readership. Just take the »Grundlagen der Betriebswirtschaftslehre«: With more than 12000 copies sold he and his coauthor Armin Scholl made a great service to our community – namely to spread quantitative thinking and analysis into the mind of many students of business administration throughout Germany. But Wolfgang Domschke did not restrict his work to text- and handbooks. Emerging from these books a large number of papers were published in national and international journals – sixty-five papers so far in order to be exact. He is regarded a leading expert in areas like

Wolfgang Domschke is also known to most of us due to his exceptional service to the German OR society: He is the founder of the OR working group on »Logistics« which he headed for several years.

From 1990 to 1996 he served as a member in the advisory board of the German OR Society. Subsequently, after the merger, Wolfgang Domschke became a member of the executive board of the Association of OR, GOR for short. He was in charge of all the workings groups of the GOR, an instrument which became one of the strongest links to its members due to his work. Furthermore, he was in charge of coordinating the annual OR conferences.

For most of us this workload would be more than sufficient, but not for Wolfgang Domschke. He even took over the position of the main editor of the »OR Spektrum«, which he led so effectively und successfully for four years.

Having said this, I finally would like to shed some light on the personality of Wolfgang Domschke. He really is a very smart and reliable colleague. Despite his hard work there is always some space left for humour – a necessary relief from time to time. And he is willing to share this sense of humour also with his students, colleagues and readers. Here is an example (photo): An explanation of the production function you will find in no other textbook than the one by Domschke and Scholl.

In all three dimensions Wolfgang Domschke showed exceptional engagement and success! Let me finish this laudation with a parallel to George B. Dantzig and a well-known saying:

»If the world were linear – Dantzig would be the king.«

Many thanks to you Wolfgang, congratulations and all the best for the future!