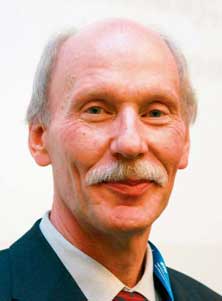 It is a great pleasure for me to make a speech in honor of Hartmut Stadtler. It is indeed unusual, that a teacher holds a laudation for his former student, but this teacher-student relationship now dates back 30 years, and given our age-difference of only nine years, it has changed to colleagueship and friendship meanwhile. So, I am speaking as a colleague and friend.

The academic career of Hartmut Stadtler starts with a degree as Diplomkaufmann of the University of Hamburg and a Master in Operational Research of the London School of Economics, where at that time some protagonists of the European OR were teaching, such as Ailsa Land, the author of the first Branch-and-Bound algorithm for Integer Programming, the »Land-and-Doig Algorithm«.

From 1978, Hartmut was my first and, for several years, only assistant at the University of Hamburg. Together, we established the new Chair for Quantitative Methods of Business Administration, which was in charge to teach the obligatory major »OR« for the new study course »Wirtschaftsingenieur« (Industrial Engineering). It was the time of the first »OR crisis«, the discussion of the limited applicability of OR, and so Hartmut selected for his doctoral thesis, finished in 1982, the theme »Ill-structured Decision Problems«. He developed interactive dialogue schemes and tested them in practice for the problem of stowing chemical tankships.

For his habilitation, Hartmut addressed the topic »Hierarchical Production Planning« (HPP) with a focus on the tasks of Master Production Planning and Lot-sizing and applications in the consumer goods industry. He developed and tested an HPP system for the food manufacturer Kraft in Fallingbostel. This subject remained a favored working field of Hartmut up to today, but by far not the only one, as we will see.

In 1987, Hartmut switched into practice for three years, in the consultancy SCS in Hamburg. And of course, he continued applying OR in practice. Among others, he created a routing system for waste collection for the City of Hamburg. There is a nice example for the fact, that Hartmut, as a good Operations Researcher, immersed himself into the field of applications: One of his daughters, as a little girl in the nursery school, when asked for the profession of her father, answered: »Daddy is working in the waste collection«. In 1990, Hartmut was appointed to the Chair for Manufacturing and Materials Management at the Technical University of Darmstadt, later on renamed »Production and Supply Chain Management«.

In 2004, after 14 years in Darmstadt, Hartmut returned to his starting point, the University of Hamburg, where he has held the Chair for Logistics and Production since then. So far the short CV.

The scientific work of Hartmut is distinguished by its wide spectrum, practice-orientation and the large number of high-level publications. Let me justify these three characteristics:

First, his work is versatile: Besides the before-mentioned subjects, Hartmut worked also on cutting stock problems and on the design and control of automated block storage systems.

In Darmstadt, he intensified his studies on dynamic lot-sizing. For the difficult case of capacitated multi-level production with setup times, he developed novel modeling techniques, such as the formulation as a Simple Plant Location Problem, special cutting planes, and a moving time window for the lot-sizing decisions. Moreover, he investigated the behavior of planning concepts under a rolling horizon. And in his most recent publication, just appeared in EJOR, he still reports on solving a complex lot-sizing problem in practice.

A further focus of Hartmut’s work is on planning concepts and software in practice. In the group of colleagues, in 1994, who criticized the traditional Production Planning concept and proposed an alternative, Hartmut was of course responsible for the hierarchical structure of the new concept and for the Master Planning. In the following years, the market for planning software changed a lot, and Hartmut was involved in the development, which led first to so-called »Fertigungsleitstände« (manufacturing control stations) and then to Advanced Planning Systems (APS) with a hierarchical structure. In the beginnings of APS, Hartmut activated a group of colleagues and practitioners to write a book on this subject. This book was not just a collection of papers, but followed a strict design suggested by Hartmut, answering the questions: How should APS be designed, considering the theory of Supply Chain Management? And how are they really designed and used in practice? The book appeared in 2000 and became a great success: It yielded four editions until 2008, and about 10,000 copies have been sold so far. It has been translated in Chinese, Persian and recently even in German. The later editions considered the developments on the APS market and included new topics such as Collaborative Planning, a recent working field of Hartmut.

The next step in the propagation of knowledge on APS was the Frutado project. Again in cooperation with several colleagues, an interactive learning software has been developed, based on the use of SAP-APO for the fictitious company Frutado, available free of charge in the web. It is followed by Hartmut’s newest book project, »Advanced Planning in Supply Chains«, which explains the theoretical background and use of the Frutado software. You will find it here, hot from the press, at Springer’s book exhibition.

Second, Hartmut’s work is practice-oriented. Most of his research and the related papers have emerged from cooperation with various industries: Six German shipowners, Kraft, a manufacturer of storage systems, Rhöm Plexiglas (now Evonik), Merck pharmaceuticals, Beiersdorf, and of course SAP, to name only some of them. Third, Hartmut has published the results of his research in international top journals, such as Management Science, Operations Research, OR Spectrum, European Journal of Operational Research, Production and Operations Management, and International Journal of Production Research. As an author, he was particularly loyal to the OR Spectrum, with k and with c, where he has published eight papers from 1988 until 2008. Thus it is no surprise, that in the Handelsblatt-Ranking 2008 of more than 2000 German speaking Business professors, he reached rank 19. And in a recent, still unpublished ranking of the University of Münster (A. Dilger and H. Müller, Institut für Organisationsökonomik, 2010), which is based on citations, he is even the Number two! This is a nice sign, how much Hartmut’s work is internationally recognized. He is also a member of the Editorial board of IJPR and a Department Editor for Logistics and Supply Chain Management of the ZfB.

The promotion of young researchers has always been a particular concern of Hartmut. His numerous PhD students who now have mainly Supply Chain Management positions in industry disseminate his ideas in practice. He has organized a EURO Summer Institute in 2002 on Supply Chain Management and Advanced Planning, and he is one of the co-founders of the workshop on Quantitative Methods in Business Administration (QBWL), which assembles every year the PhD students of meanwhile 20 institutes in Germany. And as one of the first members of the program faculty of the new Kühne Logistics University in Hamburg, he has participated in the design of its MSc course »Global Logistics«.

And finally, he has always kept close contact to the German OR Society GOR, as a member of the advisory council (Vorstandsrat), as its EURO representative, both for 6 years, and as a frequent author of OR Spectrum.

Altogether, Hartmut Stadtler has made a great contribution to the advancement of OR and its dissemination in practice. He is an ideal laureate of the GOR-Wissenschaftspreis.